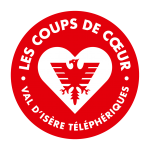 WONDER AT THE ISERAN PYRAMIDS

Pyramides is a blue run on the Massif du Fornet. It takes its name from the five pyramids that were built in the Vallon de l’Iseran in the 19th century.

The pyramids served as a guide to travellers making their way to Turin via the Col de l’Iseran in bad weather. Once rising to 6 metres, one of them is still intact but the others have not withstood the test of time.

The pyramids are located along the GR5 trail.

How do I get to it?
Take the cable car from the village of Le Fornet. On leaving the arrival station, take the Pyramides chairlift. The start of the run is on your left.

Our advice
The last intact pyramid has a little niche where you can shelter from the wind.